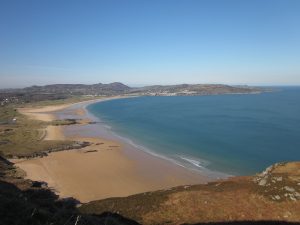 Ballymastocker Bay is situated on the East of Fanad in Donegal and stretches from Portsalon Pier to Magherawarden.

It is certainly one of the most beautiful beaches in Ireland and was once voted as the second most beautiful in the world – beaten to the top spot by a beach in the Seychelles. 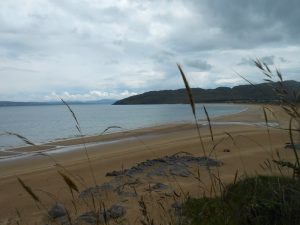 13 Blue Flag beaches on the 1235km of Donegal coastline 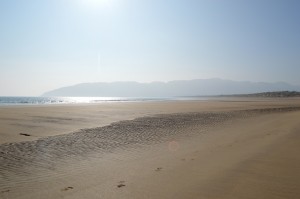 The Blue Flag is one of the world’s most recognised eco-labels. Beaches and marinas that achieve this accolade must comply with a specific set of criteria relating to water quality, information provision, environmental education, safety and beach management. At beaches the bathing water must comply with the excellent standard in accordance with the 2006 EU Bathing Water Directive. 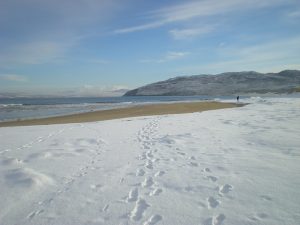 This image shows Ballymastocker during December 2010 when temperatures in Donegal plummeted to -19 ?c and snow lay on the ground for weeks

The sinking of the Saldanha at Ballymastocker Bay , a great tragedy

On Dec 4th, 1811 – the sinking of HMS Saldanha was one of the greatest sea tragedies along these shores, with the loss of more than 250 lives 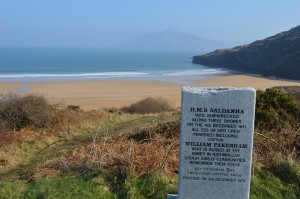 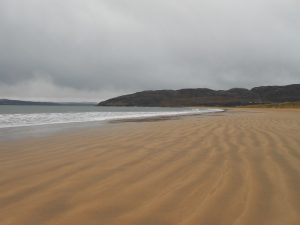 A stroll along the shore is sure to bring sightings of a wide array of wildlife. Seals, dolphins,red throated loons and curlews all spotted during 2014 to name but a few.
Look out also for pieces of the world war two plane (a large 4 engined Conslidated Liberator GR V111) which crash landed on the beach on its way from USA to Britain carrying mail bags on 10 Feb 1945.
And of course, don’t forget to look out for the missing gold bars – the Laurentic was lost to the Swilly on 26th January 1917 with the demise of 350 crew members. The ship was carrying 3211 gold bars of which 3168 were recovered.

Ballymastocker has been a chosen film location:

It has also featured in advertising campaigns promoting tourism and of course sits proudly at the top of the Wild Atlantic Way – the new driving route along the West Coast of Ireland. 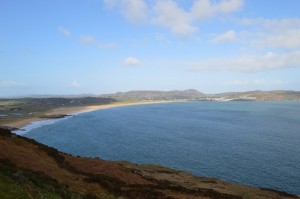 A Wild Atlantic gem in Donegal

All bookings are for adults only. 10% deposit at point of booking with balance due 28 days prior to arrival.